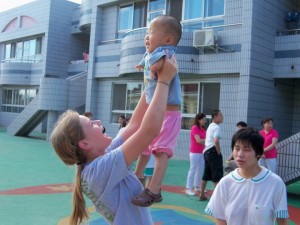 Who Could Keep From Loving Them?

“I just don’t understand why they can’t adopt American kids,” she said.

I immediately whipped my head around to see if she was walking hand in hand with her own domestically adopted child. After all: you shouldn’t throw stones if you live in a glass house. I saw no child, and I could feel the smirk creeping into the corners of my mouth, desperate to betray my thoughts. Ignorance. Tactlessness. My mind was jamming, collecting layers of angry thoughts, neurons firing at light speed. I could not think to speak, which- to anyone who knows me- is a natural phenomenon.

I said to myself, “I must remain level-headed,” a state that, when I have been properly offended, I utterly despise. This woman could be more insensitive than the waitress who suggested the “ethnically appropriate Asian salad” for my Chinese sister, Ella Grace. I was almost impressed by the caliber of her rudeness, but mostly, I was angry. I felt the hot bubbles of indignation simmering, dangerously close to boiling over. What would possess her to say something so obviously offensive and rude?

Then the answer came: she was simply ignorant.

Ignorance is not a sin, and there are so many others like this woman who have not been blessed with the experiences that I have had. They cannot understand why a potential parent would want to take on the challenge of raising a child of a different race or culture, purely because they have not experienced that desire themselves. They wonder why parents adopt internationally when there are so many children here in the United States thirsting for love and opportunity. Domestic adoption is much cheaper than international adoption, and there is a great need for parents willing to adopt these children. I empathize with these people’s claims because my brother was one of these domestic orphans. However, one cannot ignore the need for international adoption. To do so disregards the basic principles of adoption and presents a serious issue of prejudice.

Prejudice has plagued our society since the birth of culture. It manipulates us, always remaining hidden in the brush like a fox. No one wants to acknowledge its danger, and so it ravages our relationships, our government, and our society. Even adoption, a process birthed out of love for another human being, is not safe from its footprint. Everyone loves a baby, no matter what his race, but as my youth minister’s wife once said, “What happens when my black baby grows up into a black man and asks your white daughter to prom? I imagine your opinion might change.” International adoption critics love to argue that displacing children from their native ethnic and racial background robs them of their heritage and leaves them confused and lost in a new culture. These claims are wrong. The United States federal government has debated this issue, and it has been studied extensively by psychologists. Transracial and transcultural adoptees face no more psychological risks than adoptees of the same race and ethnicity as their parents. In fact, families will often make an effort to integrate their adopted child’s native culture into their lives. Many families learn their child’s native language or go to great lengths to take their child back to his or her native country. Since her adoption, my sister has traded her Chinese culture for American, but she has not suffered any deprivation. On the contrary, she is blessed. What matters most to her is not her birthplace, but that she has been cared for by a loving family and given the opportunities to have a better life than she could have had before.

However, children in America need these opportunities as well. The most common argument against international adoption is that we, as Americans, have an obligation to take care of American children’s needs before the needs of foreign children. When I am confronted with this claim, after pointing out that one’s location does not define their personhood, change their basic human needs, or limit their right to be loved, I have two replies.

First, there are around 100,000 orphans in the United States compared to 167 million orphans worldwide. According to The Washington Post, there were over 600,000 women in America waiting to adopt in August of 2008. In other words, if every woman in America adopted one child domestically, there would still be over 500,000 women willing to adopt. However, even if these 500,000 women adopted internationally, there would still be a over 11 million international orphans needing care. Now, think for moment. In 2007, 78.4% of the United States’ population of 302 million considered themselves Christian. James 1:27 commands the Church to care for the widow and the orphan. If less than half of these 236,768,000 American Church members took this command to heart and cared for the child that God had placed in their hearts, there wouldn’t be an orphan problem, in the United States or anywhere else.

Second, in America, orphans are given food, clothing, education, and job training until they are eighteen. Children who are taken into foster care because of abuse and neglect are placed in foster homes with temporary families. They learn how to take care of themselves. This does not necessarily mean they are given the same economic or educational opportunities as children with permanent families, or the same opportunities to be loved, although many of them are. However, in Columbia, orphaned children are turned on the streets as early as ten years old. In other countries, children are typically turned away between the ages of sixteen and eighteen and have little to no education or job training. In fact, out of the 167 million orphans, 120 million will never receive any education whatsoever. About 60% of these orphaned girls will become prostitutes, and 70% of these boys will become criminals by the age of 18. 10-15% of these children will commit suicide before the age of eighteen. Every year, 1.8 million are forced into human trafficking, prostitution, or the pornography industry, and 11 million will die of a preventable or treatable disease. These children have no chance at improvement. While orphans here are struggling, orphans oversees are dying. And while there is a definite need for loving parents willing to take in American children, the need for international adoption has an even greater magnitude. In order to heal this festering wound in our world, millions must respond to all the issues, domestic and international. To say that parents who adopt internationally are wrong, ignorant, or insensitive towards the needs of our country is explicitly wrong, in every sense of the word.

However, international adoption is not an easy process. It is expensive, and it can take years- after identifying a child- to complete. It is mountains of paperwork and around forty thousand dollars. Domestic adoption is much cheaper, but it is not without drawbacks. During the adoption process, birth parents can change their minds and unknown biological fathers can emerge and demand the rights to their child. Ultimately, it is the state’s first priority to reunite foster children with their biological families, which creates unimaginable stress on the adoptive family until the adoption papers are signed and notarized. Because of these challenges, out of the 600,000 women ready to adopt, only a fraction of them will receive a child. As part of a family going through this process right now, I understand, and I fully support these families trying so hard to bring home the child they love. I have experienced both domestic and international adoption, and both processes come with their own challenges, just as every birth child presents his or her own unique set of problems. What these critics fail to realize is that numbers and logic only go so far in adoption. The motivation to adopt is not a deep charitable urge, a feeling of moral obligation, or even a sympathetic desire to alleviate the suffering of a “poor” orphan. It is love and the desire to love a child, and when that love is felt, any parent will travel to the moon and back for their child, adoptive or biological. Love defies all logic.

In the end the decision to adopt is a matter of heart. A child is a child, and birthplace cannot erase that fact. Both domestic and international adoption come with risks and difficulties, but when a child is waiting for their “forever family,” as my mother says, these challenges are trivial. Robert Dale Morrison once said, “The quickest cure for racism would be to have everyone in the country adopt a child of another race. No matter what your beliefs, when you hold a four-day-old infant, love him, and care for him, you don’t see skin color, you see a little person that is very much in need of your love.” People who have not experienced this love do not understand it, and on paper, loving a strange child with an alien background seems absurd. But like the farmer that extracts the fox from the brush and eliminates its danger to his crops, families have chosen to ignore race and ethnicity in their children, and challenges will not stop them from holding them in their arms. They have discovered that race, money, convenience, and nationality have no weight in the mysterious process of love.

Anne Louise Pass has grown up with a passion for orphans, which she credits to her family. Her father is an international missionary for Visiting Orphans, and she has two adopted siblings, one brought home from China and one adopted domestically. She has traveled to orphanages in China and Haiti and plans to go to Rwanda with her father in December to visit two orphanages and her twenty year old “sister,” Amèlie, the girl her family has fallen in love with and considers family.

These experiences have given Anne Louise a unique perspective and fostered a mission to “speak out for those who cannot speak for themselves,” as she says. As an eleventh grader at The Montgomery Academy in Montgomery, Alabama she plans on continuing her education in order to bring glory to God and share his hope with those who have none, wherever that may take her.

Previous Post: « Jedd Medefind invites you to watch STUCK
Next Post: Who Would Do Such a Thing?: Pavel Astakhov and the Russian Adoption Ban »