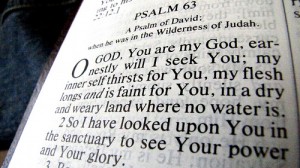 I had the opportunity recently to listen to a sermon on adoption by CJ Mahaney.  I found it in a “junk” drawer with a bunch of other CDs and listened to it on the way to a business meeting in a nearby city.  Through this sermon, I was freshly stirred-up to know Christ and make him known through adoption.

Several points stuck with me, but I’ll just share one.

“Abba, Father”:  In Galatians 4 Paul encourages the church to embrace the reality that they are no longer slaves, but sons.  He writes, “when the fullness of time had come, God sent forth his Son … to redeem those who were under the law, so that we might receive adoption as sons.  And because you are sons, God has sent the Spirit of his Son into our hearts, crying, ‘Abba! Father!’”

What is this cry, “Abba!  Father!”?  We see Christ using this language when he is in the greatest turmoil of soul in the Garden of Gethsemane – when the weight of his impending suffering was pressing upon him.  Matthew recounts it this way in chapter 14:  “And going a little farther, he fell on the ground and prayed that, if it were possible, the hour might pass from him.  And he said, “Abba, Father, all things are possible for you.  Remove this cup from me.  Yet not what I will, but what you will.’”  It was out of the moment of greatest anguish of his soul, that we see Christ crying out to God, “Abba, Father.”  When Luke retells these events, he illuminates the anguish of Christ’s soul by recounting the fact that the blood vessels on Christ’s forehead burst as he sweat drops of blood.[1]

My mind raced to my own personal experience with our son.  Our son came into our family through adoption at the age of 3.  We had been home with our son for about 6 months and his sleeping patterns had somewhat normalized.  He no longer needed us to lay with him until he fell asleep.  We could do our bed time routine, then leave him to fall asleep by himself.

This particular night, however, things were quite different.  We were staying at a family member’s beach house in Florida. New location – strike 1.  Our son was overly tired from lack of sleep and overstimulation.  Greater difficulty in controlling emotions – strike 2.  When bedtime came, we followed our normal bedtime routine and left him in the room.  Fear of abandonment – strike 3.  What ensued for the next 30 to 45 minutes was the most gut wrenching, blood curdling screaming that I have ever heard.  And mostly, it was the same word over and over again, “Daddy!”

Now, we didn’t just let him scream by himself the whole time.  We would go in, try to calm him down, pray with him, then leave again.  But, the same thing ever time.  After a few moments the desperate. panicked screaming for “Daddy!” would begin.

I think all three of the strikes were weighing against my son:  New place, overly tired, and fear of abandonment.  That last one is the most thought provoking to me.  Our son didn’t know where we were and it freaked him out.  We explained to him that we were just in another room, but I don’t think he trusted that we wouldn’t just leave him there.

Remarkably though, despite his lack of trust in the security of his relationship to us, he still cried out to his Daddy.  My son had not only an actual legal adoption, but also an inward impression that led him to call out to me in his desperation – a spirit of adoption.

My son finally went to sleep that night.  The last time I went to check on him and calm him down, he was sitting up on his sleeping mat.  He was screaming with everything in him, tears and snot covering his face.  I took him in the bathroom to talk to him and try to calm him down.  He couldn’t keep from yawning with exhaustion between his sobs.  Finally, I just made him lay down on his mat… and he probably went to sleep within one minute.

The next day, he woke up, right-as-rain.  The dark night of his soul had passed.  But that intimate, desperate soul cry for his Daddy never left me.  I think this is close to what Paul wanted to convey to his readers in Romans 8 when he explained that we, as believers, “have received the Spirit of adoption as sons, by whom we cry, ‘Abba!  Father!”

Paul goes on to explain that “[t]he Spirit himself bears witness with our spirit that we are children of God.”  This is one of the most beautiful gifts of the Gospel; not only did God, as the righteous judged, pour out his just wrath on his son, instead of us – neutralizing the indictments against us.  But he went further than that … he adopted us as sons.  “Us” who once were his utter enemies, are now given a place at the table of God’s sons.

This is the blessing of the Gospel:  when we are in our soul’s dark hour, we can cry out “Daddy!”, “Abba!  Father!”, and know he hears us, and protects us, and will never leave us.

CJ graciously lists several resources for further study to help solidify our understanding of the doctrine of adoption.  I list them here for you along with a link to CJ’s sermon.

Mahaney’s sermon:  God as Father:  Understanding the Doctrine of Adoption

Previous Post: « How long does Alabama adoption law give a birth mother to change her mind?
Next Post: C.J. Mahaney on Adoption: Assurance »