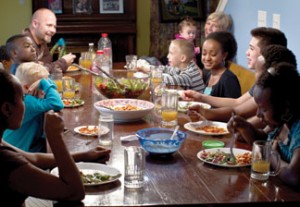 World Magazine’s January 28, 2012 issue highlighted several pro-life and adoption related articles.  Of particular interest was an article about a family with a last name that sounds like they invented Twitter:  the Twietmeyers.

As I read the article, I lost track of how many children they’ve adopted.  They adopted at least one child with HIV, one child with Down syndrome, and several from Ethiopia.

Why would a family do that? How can they afford it?  Well, they aren’t wealthy by American standards.  Kiel, the husband and dad works as a painter and decorator and earned $72,000 last year.

Do the Twietmeyers suffer from some from strange orphan-Hoarding mental illness?  Kiel says that, “If we know who we are in Christ, and what we are empowered to do, we’d realize we’re here to fulfill needs.”  Rightly so, Kiel – as Paul put in in Romans 12 “Therefore, I urge you, brothers, in view of God’s mercy, to offer your bodies as living sacrifices, holy and pleasing to God-this is your spiritual act of worship.” (NIV)

Here’s a little something extra in case you missed it … they adopted at least one child with HIV.  And after reading the article … it didn’t seem quite as scary.