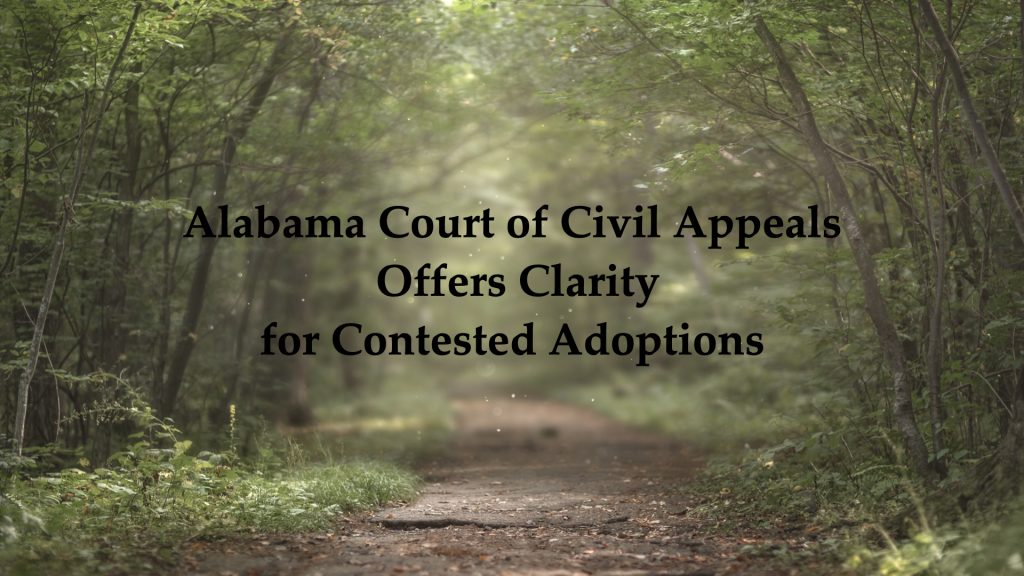 A child cannot be adopted without the consent of her natural parents.

In Alabama, that consent may be expressed (through a signed affidavit) or implied. A trial court may find that a parent has given implied consent to an adoption on multiple independently sufficient grounds under Alabama Code § 26-10A-9.

On October 21, 2022, the Alabama Court of Civil Appeals released one of the most significant opinions on an adoption case in years. The opinion treats the issue of implied consent at length. Its guidance will shape the course of future contested adoption hearings in Alabama.

An aunt and uncle filed for adoption of their two nieces. The father of the girls had passed away in an automobile collision in 2015. The mother had longstanding struggles with drug addiction.

In 2018, the Department of Human Resources filed dependency actions and placed the girls in the home of their maternal grandparents. In August of that year, the grandparents executed a joint agreement with the aunt and uncle. The Juvenile Court reviewed and granted the agreement, awarding custody of the children to the aunt and uncle.

The agreement and custody decision allowed for the mother to visit with the girls. However, she often missed visits and phone calls, or cut them short. During these periods, the mother was in and out of drug rehabilitation programs. She never contributed support to the children, even when she was employed for fourteen months.

Presiding Judge Thompson delivered the opinion of the Court of Civil Appeals, affirming the Juvenile Court’s finding of implied consent.

One of the grounds for implied consent is “failure to maintain a significant parental relationship.” Citing Black’s Law Dictionary, the Court of Civil Appeals explained that “[maintain] is defined as not to lose or surrender; not to suffer to fail or decline.”

The Court agreed that the evidence convincingly showed the mother had allowed her relationship with the girls to suffer due to her conduct.

The mother argued on appeal that her more recent efforts should cancel out her prior failures. But the Court of Civil Appeals stated that the law is unambiguous: implied consent, once it is given, is irrevocable. It cannot be withdrawn.

The Court of Civil Appeals further stated that “there is evidence in the record to support the conclusion that the adoption of the children and the children’s continued contact with the mother are not mutually exclusive options.”

In other words, after adoption, the possibility remains that the mother could have a relationship with the girls, if their adoptive parents determine that to be in their best interests.

The breaking of a natural family through death, abandonment, neglect, or abuse, is a tragic event. Adoption brings healing, permanency, and stability to a child’s life as they are incorporated into a new loving family. The provisions of Alabama law regarding implied consent provide a pathway toward that end.