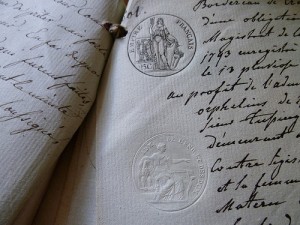 I called and asked Jefferson County about this question.  They basically said it has always been their “procedure” to have affidavits taken by notaries, but that their procedure may not be rooted in legal necessity.  The clerk said he would look into the question and get back to me.

Even if this argument could fly in the social worker’s local probate court, it’s questionable if it would be upheld on appeal.  There are cases where evidence has been excluded from consideration on motion for summary judgment because the affidavits were not properly authorized.  The safest way to avoid the risk of future litigation is to have all social workers authorized as notaries – thus eliminating the risk.

Perhaps your agency has been operating under the assumption that social workers are allowed to receive affidavits.  Take comfort … my research has indicated that this issue has never come up on appeal in Alabama.  So, it’s reasonable to conclude that the risk is minimal.

However, ignorance is bliss … and now that you know, you have to decide whether the convenience is worth the risk.

If your agency decides to continue to let social workers take affidavits, then I recommend using this sample affidavit to help reduce the risk.

I further state that I make the forgoing under penalty of perjury and may suffer the legal punishment for the same.

The execution of this document is taken before a person duly appointed to witness and receive this document in accordance with the authority implied by Section 26-10A-12, Code of Alabama.