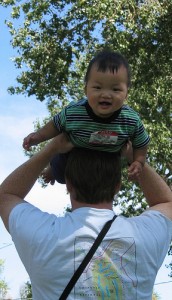 In 1997, I accompanied my parents to an orphanage in Tianjin China to complete the adoption process of my sister. Everything worked like it was supposed to, without any difficulties and we all returned to the U.S. happy to have a new member of the family and assuming the long adoption process was over. It was not until fourteen years later, when my sister needed a U.S. birth certificate to get a driver’s license did my parents realize they had forgotten to go through Georgia’s readoption process.

Readoption, sometimes referred to as Domestication of a Foreign Adoption Decree, is the process by which a court in Georgia recognizes that an international adoption is valid.  The Georgia Code says very little about the readoption process but states in 19-8-8 that a Superior Court in the state can issue a readoption in the following two ways. 1. A decree entered in a court of competent jurisdiction outside the United States, establishing a parent/child relationship or 2. The child has been granted a valid visa by the United States.

Practically, why is this readoption process important? Having a child readopted allows the state of Georgia to issue a valid Georgia birth certificate to the child. Having a Georgia birth certificate will make things such as applying for driver’s or marriage license much easier later in life. Additionally, being readopted in a Georgia court will make it much more difficult for the validity of the adoption to ever be challenged in a foreign court.

For more information on readoption laws in the United States and in the state of Georgia check out  ChildWelfare.gov.

Chris is a graduate of Faulkner University’s Thomas Goode Jones School of Law in Montgomery Alabama; with and expected bar admittance date of October, 2012. He and his wife Kayla reside in Tucker Georgia and attend First Baptist Atlanta.